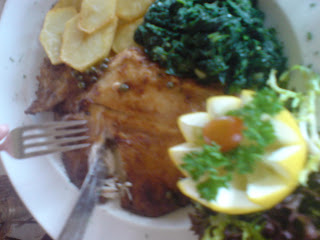 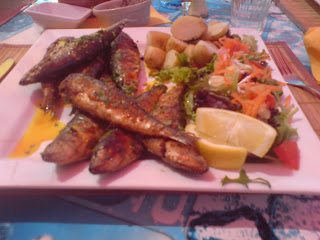 Sardines from "That Shack".

Oily fish, garlic, potatoes and a glass of wine, eaten and enjoyed on a warm Portuguese afternoon and at no time did a bone stick in my throat. That didn't happen until I ate my second plateful a few days later, the antidote to this problem was the simple application of bread and butter washed down with a bottle of red wine, some Superbock lager and nine hours sleep and "hey presto!"no fish bone, just a mild headache and the memory of a tickle. Seafood consumption is not without it's problems, try the spaghetti and clams if you don't believe me.

We rented a car that was amongst other things "sixty day blue" from a company called Thrifty. It was a Renault Megane estate. Thrifty were not the most attentive or punctual of hire companies - the first car they offered us (also in sixty day blue) was all bashed up and had a broken mirror, I thought at first they were having a laugh but they were serious. We got serious also and got another car.
("Sixty day blue" is a trade term for a certain colour of vehicle that will remain on a used car lot for approximately that amount of time before it eventually sells).
Posted by impossible songs at 10:04 AM
Email ThisBlogThis!Share to TwitterShare to FacebookShare to Pinterest