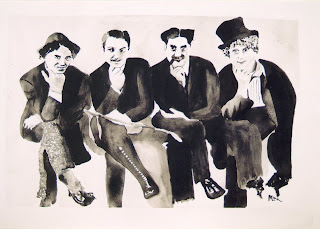 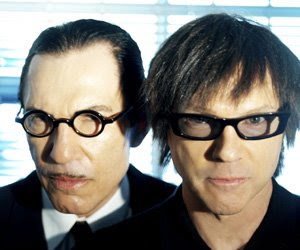 I probably have an obsession about the Marx Brothers based on the notion that heaven and eternal life may turn out to be quite similar to being trapped in one of their films. A strange kind of cross over place between hell and heaven, with love, laughter, comedy, torture, bad songs and acting and every so often some surreal piece of intervention. I am probably wrong about this.

Sparks on the other hand have produced some interesting music over the years, most of which I've avoided but that's not because I dislike them. It's more down to my capacity to take in and absorb, it's always been low compared to the true music fans.

Tea tonight was a hotch potch of M&S goodies (£10.00 for a meal for two with wine), as it turned out I added to the feast with additional M&S finely packaged chicken. Heated and served in moments and then it was gone in the ping of a microwave.

Next over to field to check on the many horses and shiny caravans that had arrived for the weekend show and then on to locate the buffalo burger van for tomorrow's lunch. No problems, it looks ready to roast and I'm assured the sun will continue to shine. It's been a long week.

Posted by impossible songs at 7:48 PM
Email ThisBlogThis!Share to TwitterShare to FacebookShare to Pinterest