Despite being 14 at the time and not totally daft I recall being a bit unaware and unimpressed by the moon landings in 69. For some reason my little world did not stand still and I didn't stare into those grainy TV pics in wide eyed wonder. Seems I missed out on one of the biggest events in mankind's history thanks to indifference, rampant hormone activity and a spell in the Army Cadets (I was at summer camp at the exact time, learning to smoke, drink and throw up). I can't be the only one of my generation who was like this, afflicted by some virus of Scottish working class dunderheaded apathy and indifference? At least I've grown out it now (I think). Sorry Neil, Buzz and the poor bloke in the command module who had to whistle and read magazines, I finally get it. 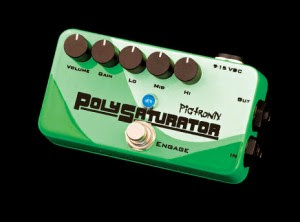 Anything made by a firm called Pigtronix has to be good, not so keen on the $169 price tag however.
Posted by impossible songs at 8:50 AM
Email ThisBlogThis!Share to TwitterShare to FacebookShare to Pinterest