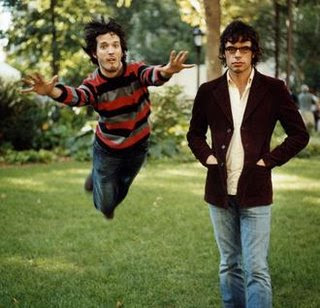 The last episode of Flight of the Conchords was aired last night, it may of course have been shown before, how would I know? I’ve grown into liking this dumb, childish and ruthlessly inventive show but it ended with a whimper rather than a bang, unlike the real Concorde. I like the way it tips into the surreal every few minutes: At a band meeting Murray is showing Brett and Germaine a script he has written for a musical based on their exploits in New York, it’s his last desperate bid for fame and fortune now they have been evicted from their apartment. The script is really just a record of what they’ve done albeit it lapses into the Star Wars story line from time to time. When Brett criticises the idea and makes a remark Murray points to the script, at the part that is now completely up to date “See, I had already written what you just said!” pointing to a scribbled line in the yellow journal. Not sure any of it made any kind of sense or made me want to visit New Zealand though.


Things that you cant get anymore: