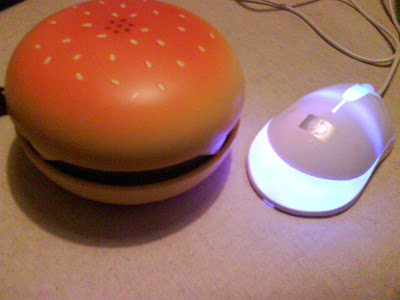 "I feel wonderful because I see that love light in your eyes..."
It was a relationship that I'd never have expected to see blossom but strangely enough the Light-Up HP Mouse and the Hamburger Phone do seem to be shaping up rather well in the early stages of their romance. They've spent quite a lot of time together, mostly alone in the quiet of the dining room getting to know one another but it has reached to the point where I'm feeling a bit odd walking in on them unannounced. Perhaps I should knock or just cough a little before slowly entering the room. Anyway they make a cute couple and despite a few fundamental differences in voltage, functions, circuitry and ethnic backgrounds (Hamamastu, Japan and Jiaxing, China respectively) I think they'll do fine. They've come along way to get this far and I just need to make sure that they don't meet up with the rather aggressive electric can opener residing in the kitchen.

So what about Meccano? James May seems to be to blame for this latest outburst of spanner and Allen Key activity (I recall when AK was a simple screwdriver). Unbridled nostalgia and a fair amount of boredom have resulted in experiments surrounding "roll-over" or "self-righting" go-carts made from Meccano's best. We need to do a bit more work on this but at least there is a prototype to experiment with. We're actually doing a trial run at Knockhill tomorrow. 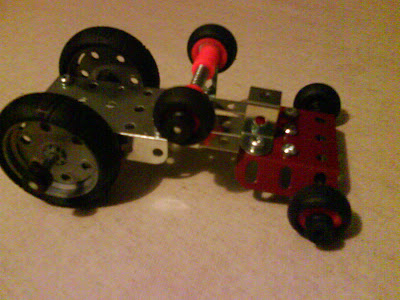 As about to be featured on BBC's "Top Gear" - note the ironic lack of gears, cogs and mechanisms of any kind.
Posted by impossible songs at 5:36 PM
Email ThisBlogThis!Share to TwitterShare to FacebookShare to Pinterest