Philosophy is not so tough 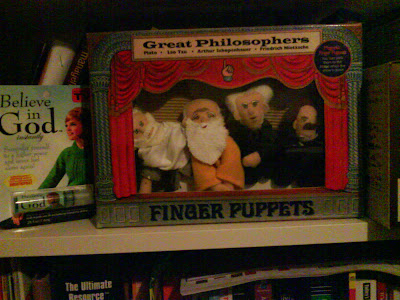 These guys don't say much but their thoughts are priceless - Plato, Lao Tzu, Arther Schopenhauer and Friedrich Nietzsche. They also double as fridge magnets but the door is overcrowded (see below), so they reside on a bookshelf adjacent to a digital radio, books and some useful "Believe in God" spray. It's really a utility shelf for existential emergencies. They crop up around here now and again.

I have a theory about famous philosophers: most if not all were hampered by having a malfunctioning sense of their own space. They were the kind of people who were never quite sure where and how they fitted in, sometimes they were in your face, on your elbow or just generally invading some other no-go zone. After some struggles with continually bumping into people and being a source of annoyance they retreated into their own private space to think and write heavy philosophical books hoping that one day once the books might be read and published. Then once they have established a philosophical and literary reputation they can come out of hiding and invade space again and start a series of pointless circular arguments nobody can really be bothered with - all because they never learned the extended elbow rule. Sad.

It may well be that you do not, as yet know the extended elbow rule, if that is the case then you might want to click here, or not as the case may be. Whatever you do be mindful that you have a choice.
Posted by impossible songs at 6:56 PM
Email ThisBlogThis!Share to TwitterShare to FacebookShare to Pinterest