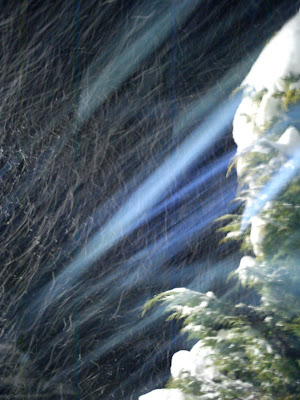 Indisputable photographic evidence of something.
Dear Mrs Anabelle Goldie,
I am writing to you as I consider you to be a sensible and mostly straight up person and an all round good egg. I now have proof that snow is truly demonic and I wanted you to know, it could not have existed in the Garden of Eden and was brought into this world by the unfortunate "fall of man" approximately 5050 years ago or so. Above is a small part of photographic evidence I am putting together to form a comprehensive dossier on the unsavoury and antisocial behaviour of this supernatural and frankly bloody freezing substance. This (eventually buff coloured) dossier will be passed onto the (strangely quiet at the moment) so-called Scottish Government so that they can take proper action against this illegal frozen H2O - namely the phantom menace that is snow. Hopefully the full force of the law will come down upon said menace and it will be banned from these fair shores etc. etc.
Yours in anticipation,
Cardinal Sir John Knox of Bathgate. 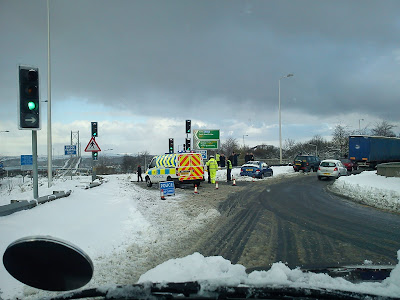 Polis stopping traffic and chatting to punters, £60m or thereabouts was also lost to the economy at the same time - strange or what? (Note closed bridge thing not far away).
After 42 years on uneventful events the great bridge was closed today totally severing cultural links with the Kingdom of Fife (temporarily). For 12 long hours we teetered on the brink of complete collapse, anarchy and no pies from that posh farm in Puddledub until they got their act together and arranged for the 42 year old Lada snow plow to be fixed up at Tom Farmers in the "Toon", whit a relief! The Queen will be making a statement shortly.
Posted by impossible songs at 12:46 PM
Email ThisBlogThis!Share to TwitterShare to FacebookShare to Pinterest