Edinburgh School for the Deaf 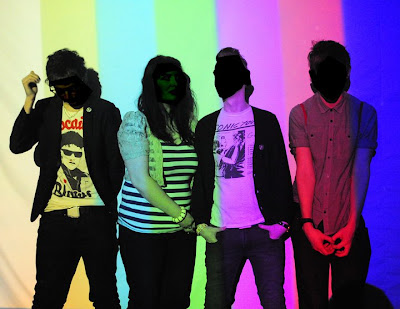 It was Zimmerman night in the Voodoo Rooms, tall tables were set and there was stale perfume, the riders were seated and the horses were shod, all gathered like disciples to their Zimmerman God.

The God that gave meaning and words and reward, they soaked in his lyrics and music's recall, three songs maybe two, fifteen minutes of fame, a dwarf eating spiders and a beggar who's lame.

If there was a prize, award or free lottery entry for Bobness renditions at the Voodoo Rooms (I really like typing the word voodoo for some reason. What might be your favourite type of typing words or are you so uptight and dimwitted that you never even thought of that at all and you don't appreciate words or ever take pleasure in the simple beauty of their various forms, shapes and sounds? If not then find out about WC Fields or somebody before it's all too late and you dry up inside like an avocado stone left forlorn in the sun) last night The Invisible Helpers would have won, led by Norman L they were a magnificent, churning urn of burning Bobfunk. The prize for unBobness, a good name and bizarre but predicable antics would go to the ESftD as rendered above.

Tea tonight was Masochism and Sadism shepherds pie gathered in a quick fire shopping spree plunder in one or other of their busy and very public emporiums. I filled two bags with ready meals, dairy produce and mystery cakes. I like mystery cakes (particularly if they have that voodoo icing on them). Small bananas £1.49 but ready to eat.
Posted by impossible songs at 7:52 PM
Email ThisBlogThis!Share to TwitterShare to FacebookShare to Pinterest