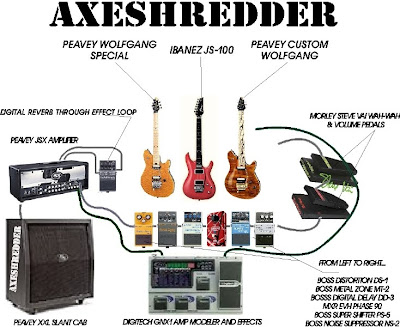 I didn't watch the Brits and I generally avoid award shows of that kind. The news snippets I gleaned from the web were enough to remind me why. A general parade weak on talent and in a state of constant mediocrity is all I can really see from the safe distance of the other side of the screen.
So, from the human side of the screen today's top guitar effects are:
1. Clean delay - sounds feeble but really does stretch rhythmic ideas.
2. Octave pitch - noisy with distortion and a lot going on in the background.
3. Wah distort - added chorus in there somewhere, can't stand to keep it going too long though.
4. Blues lead - like having oil on the fretboard, every phrase becomes a super fast skideroo Iommi special.
5. Blues rhythm - obvious partner of No4 and nice to toggle between the two.
Also everything today is being played at full speed and minimum volume on battery power only; how green is my value?
Posted by impossible songs at 9:25 PM
Email ThisBlogThis!Share to TwitterShare to FacebookShare to Pinterest