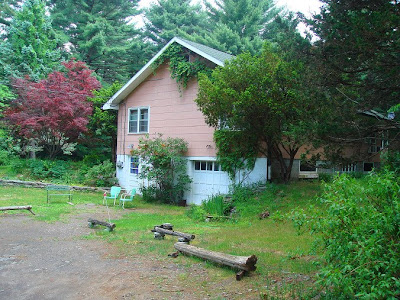 It's probably true to say that the best music is simple, at least simple in it's construction and the concepts it describes. The thing is that it is really difficult to write songs that work on a number of levels, pack a punch and describe and illustrate the basic issues that we humans grapple with. Songs that say something about common experiences and problems in a few short minutes and stick with the listener in a memorable way. Big Pink, after all these years still works, still communicates, still sounds good. I wish I knew why and how.

According to songwriter Robbie Robertson, "The Weight" was inspired by the films of Luis Buñuel, about which Robertson once said:

(Buñuel) did so many films on the impossibility of sainthood. People trying to be good in Viridiana and Nazarin, people trying to do their thing. In ‘The Weight’ it’s the same thing. People like Buñuel would make films that had these religious connotations to them but it wasn’t necessarily a religious meaning. In Buñuel there were these people trying to be good and it’s impossible to be good. In "The Weight" it was this very simple thing. Someone says, "Listen, would you do me this favour? When you get there will you say 'hello' to somebody or will you give somebody this or will you pick up one of these for me? Oh? You’re going to Nazareth , that’s where the Martin guitar factory is. Do me a favour when you’re there." This is what it’s all about. So the guy goes and one thing leads to another and it’s like "Holy Shit, what’s this turned into? I’ve only come here to say 'hello' for somebody and I’ve got myself in this incredible predicament." It was very Buñuelish to me at the time.

Posted by impossible songs at 12:12 AM
Email ThisBlogThis!Share to TwitterShare to FacebookShare to Pinterest