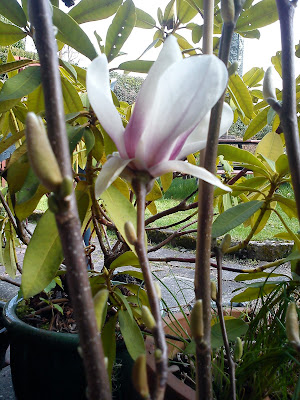 First Honeysuckle breaks through.
Not working until the afternoon today so a new and strange AM behaviour pattern emerges. Mostly revolving around getting up later, having a later shower and having a later breakfast, that and fiddling around on the laptop for half an hour insulting people on Twitter and absorbing the news. Nice to be comfortably middle-aged, suffer mild post gardening pains, hangover free and be in no particular hurry for a change. Next - SHOWER. Irrelevant historical detail: As you can see the exploitation of religious icons is nothing new, as a fifteenth century T shirt vendor hawks Jesus designs by the side of the M4 near Windsor. She ran low on inventory when demand outstripped supply and shortly thereafter she was taken away and ritually sheep dipped - according to the artist's notes on the rear of the canvas.
Posted by impossible songs at 8:47 AM
Email ThisBlogThis!Share to TwitterShare to FacebookShare to Pinterest