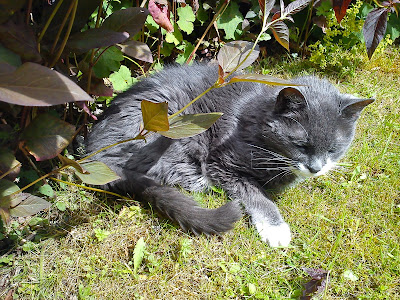 Cat out in the sun shock.

It's in the early morning that the brain works best. All the connections are fresh, their hungry apertures wide open, sparking pieces of protein are readily available to go to work and connect. In this blissful state of clear protein connection a higher level of thought process can be achieved. It was in just this elevated state that Chaos Theory, String Theory, the electric light, chewing gum and the internal combustion engine were all first conceived. KFC's secret recipe (including the various Southern herbs and spices) was concocted, the Space Shuttle's wiring looms were designed (if they ever were to be unraveled they would reach from here up into space apparently), a device for threading needles for blind or one handed people, the home computer and the first five chapters of the Bible were written onto the inside of a cereal pack; all of these came to be just as the sun was peeking up towards the floating clouds, across some misty far away horizon with Stonehenge shrouded in the distance. With that great panoply of invention and achievement behind me and only my addled imagination before me I rose today at 0550 to take in the cosmic lentil broth and draw deeply of the inspirational ozone to seek what I might write, invent or break through on.

After a few moments finding my bearings (remembering my name, my mantra and what household appliances might not be working properly and therefore should be avoided) I ate a banana, looked out of the window, took a shower and cleaned my teeth...slowly a picture emerged...yellow, white and bubbling like that primal, life giving soup from which ugly, slimy creatures once emerged duly blinking in the wonder of that forgotten evolutionary moment, still full of all the essentials oils (and herbs and spices) and encapsulating all the vital and precious elements necessary for human life as we know and perceive it to be. Oh yes, the secret of the universe is what I always thought it might be, the humble fried egg.

The power and majesty of the eternal forces of thunder and lightening have ravaged the local countryside over the last couple of days. Sheep and cattle have been worried, toads have been absent and cats have been seriously perturbed to the point of distraction and emitting strange mewing sounds. Worst of all has been the cynical and clinical fork of lightning that has somehow severed our phone line, dead, dead as a dumb dummy. Strangely the inter-twerp has survived and is operating at full power (at a snail's pace in a race between two very tired snails). Faced with little choice I retired to another friendly number and phoned for help, not a good experience. BT provide a barrage of messages designed with the commonest of men /woman/people in mind, there is no escape, you have to listen to every word and of course obey. Step by step you follow but nothing happens, then the messages end leaving a handy customer vacuum. I phoned back again eventually getting placed in contact with a fellow human who spoke bad English. We exchanged pleasantries, the story of the storm and explored the possibility of other local problems. It was however all too difficult to fathom by phone and now an engineer must attend. We shall meet this great man on Wednesday it transpires, in the meantime the phone will not ring unless some of the white man's magic prevails. Surely a little piece of God's revenge on us all.

Posted by impossible songs at 10:34 AM
Email ThisBlogThis!Share to TwitterShare to FacebookShare to Pinterest