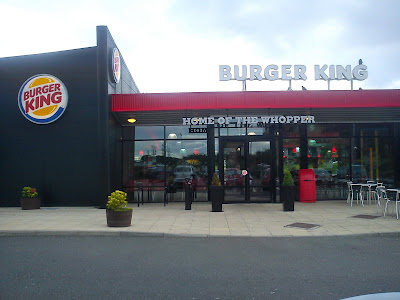 Dining in Burger King is a guilty and over indulgent pleasure, too large, too filling, too much onion and over priced. Their tills and price list don't quite match up, after any order you always pay a fiver more than you expect, unlike MacDonalds here you end up paying less than you think for inferior concoctions. Angus burgers are tasty though, big, hearty and you just want to gobble them down which is exactly what I did. Salt is of course an optional extra and only used by the over 50s in a desperate bid to pep up the fries, they seem to have slimmed their fries down recently for reasons of economy not customer satisfaction. The shake was too small and too cold, so much so that I had three brain freeze moments in my first three sucks, I suppose that's my own fault. Overall verdict; the right thing at the right time, Angus has all the beef you need, nothing else really matters much – 7/10.

The school holidays bring in the yummy mums with their hungry broods. A few weeks into the break and already they look worn out. A handful of years ago they were bright students, head girls and prefects with clear skin and bouncy hair. Then they discovered the joy of sex, home ownership, fitted kitchens and the inevitable parenthood trap, their other halves planning separate futures from some traffic queue on the M80. Now the hair is pinned back, kids called Jack, Hamish and Sophie emerge from complex car seats and attempt to eat chicken nuggets, always one eye on the Jungle Jim, the other on the sachets of ketchup. Meanwhile procession of drug dealers and petty criminals crawl past the window on the way to the drive-thru, you have to do something to pass the time in the middle of the day. Then the tattooed bikers and truckers come in for a snack and unless I'm mistaken it's that fat couple from Falkirk who just won £161m on the lottery. Everybody gets hungry sometimes and sometimes only a burger will do.

Posted by impossible songs at 7:22 PM
Email ThisBlogThis!Share to TwitterShare to FacebookShare to Pinterest