A brace of bikes and unrelated cat matters 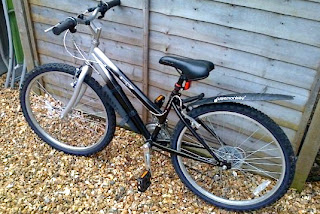 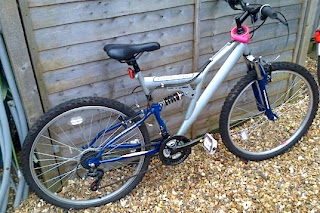 Bikes: Collected another two kids bicycles tonight courtesy of the good people at Gumtree and a willing cash machine. Other than a flat tyre and a locked padlock without a key they seem to be perfectly serviceable. My hope is that one day, if the weather ever picks up into a Springlike Spring or Summery Summer they'll be put to good blood pumping use out on the highways, byways and picturesque local pothole sites.

Cat in a locked room mystery: It turns out that if you inadvertently lock a cat in a room it will try (unsuccessfully) to claw and dig it's way out of said room. I have since discovered that this can also have an adverse effect on the carpet and floor coverings resulting in some battle damage. Once released from the cruel twelve hour prison the cat of course acts as if nothing whatsoever had happened.
Posted by impossible songs at 8:29 PM
Email ThisBlogThis!Share to TwitterShare to FacebookShare to Pinterest