From the Department of  Old Chestnuts:

"I've seen things you people wouldn't believe. Attack ships on fire off the shoulder of Orion. I watched C-beams glitter in the dark near the Tannhäuser Gate. All those moments will be lost in time, like tears ... in ... rain." 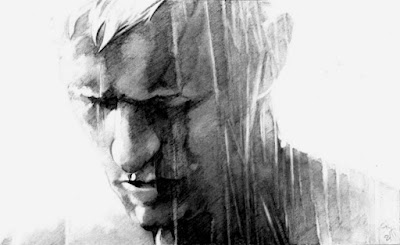 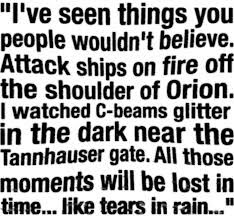 Just checking on a listing in this month's (freebie) Empire magazine, revealing someone's idea of the top 50 Greatest Sci-Fi Moments. A fairly predictable (all the big, expected movies figure one time each) but still entertaining list. Everybody likes a good list now and then. This Blade Runner piece of tosh comes in at No3, No2 is the BMX flight over the moon in E.T. and No1 is HAL shutting down with all the trauma that goes with it in 2001. I'll just leave it at that. 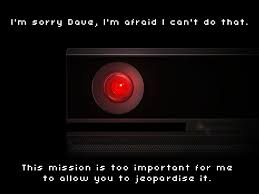 Posted by impossible songs at 8:07 AM
Email ThisBlogThis!Share to TwitterShare to FacebookShare to Pinterest