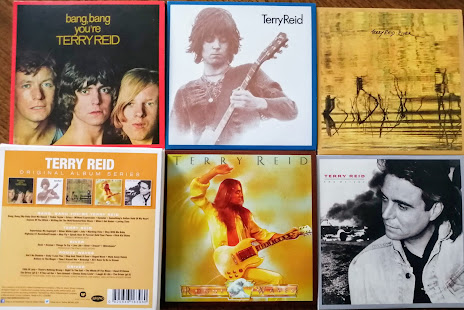 I'm not sure what I was thinking, a fairly common experience for me. I'd been watching a YouTube snippet of Terry Reid performing at Glastonbury in 1971 and was also idly reading a little about his musical career, or his lack of a career you might say. A nearly man who seemed to miss out on one opportunity after another but is still going (?) strong  somewhere in the music business, in quasi obscurity. He was always highly regarded by the press and his peers but lacked that magical edge the others had. Wrong places, wrong times, who knows? So despite a decent voice and a quirky kind of talent he remained a ghostly figure during rock's golden years when the rest were cashing in. Now he's old and grizzly, like me.

Then into my irregular Amazon feed came a daft offer; five of his albums in a box (I don't mind CDs either) for a fiver. I agreed to make the transaction. That was a few weeks ago. I'm now trying to decide at what point I give them a listen, perhaps on some future longish car journey when Radio 4 isn't interesting. I'm procrastinating.

History is repeating itself here, I'm sure back in 1971/72 I saw Terry on the Old Grey Whistle Test playing songs from "The River". Bob Harris was very enthusiastic about the album. I meant to give it a listen, but I never did. It all just floated away, for me and about a million others I guess. We moved on silently. Now I find myself in the same place. When will I ever get round to listening to Terry Reid? Deja Vu.

Posted by impossible songs at 9:06 AM
Email ThisBlogThis!Share to TwitterShare to FacebookShare to Pinterest