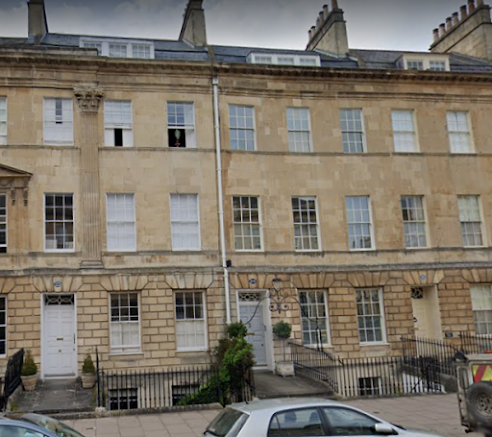 Twenty Four Great Pulteney Street, Bath (Second Floor Flat): My home and postal address many years ago in the serene city of Bath. Over the years I've spent a lot of time there between college and work. I've a soft spot for the wide streets, Georgian buildings and the overall ambiance and style of the place. Bath is OK (or at least it was the last time I was there). Strangely Bath is also the home of "Wings Over Scotland", the unruly and controversial website that continually picks fights with the Scottish Government/Parliament, calls them to account and shouts abuse.

Of course WOS is a provocative read and not exactly  balanced or accurate at times, but then neither is life or politics so ... so what. It arguably has a bigger readership than anything else within the Scottish media, the civilized side being bunch of turncoats mostly. Truth is that the SNP and the Scottish Parliament badly needs a kick up the arse now, maybe the high energy and pointed writings of Wings is the tool to use as Holyrood remains stuck in a mire of their own making; fat, happy (?), complacent and icily detached. Every one in ever party ... well almost. And of course Westminster is about to administer a slow dose of economic strangulation and the long screwdriver of interference. Time to protect your MSP pensions folks, your days are numbered.

Whatever happens in the Sturgeon v Salmond wars there are no winners; Scotland just looks foolish again, incompetent and weak. Infighting isn't a good image. Westminster is exactly the same but is well protected by a sympathetic media that tolerates the bad behaviour of certain types, all bought and sold. Scotland remains as bouncy as a burst football, easily kicked over the hedge and ignored or brought out as a colourful and comic distraction when it suits. Our comparatively decent record on dealing with Covid is squandered by these distractions. Strangely there was a flurry of people actually joining the SNP last night, according to Twitter anyway. Sympathy for Saint Nicola I guess or just some faithful bots?

But right now the SNP have certainly lost my confidence; last year's insulting exams catastrophe, the waste of energy and puff on Brexit, the current AS muddle and the putrid investigation, the lack of political ownership and most worryingly the morphing of the party into a tight and inflexible, inbred community cult where disagreement isn't tolerated. It's all rubbish really and I'm marooned with no one to vote for. 😕 None are fit for purpose. Where do we go from here? 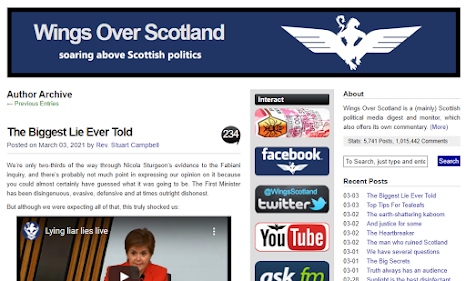 Politicians are after all just people, sometimes brilliant, greedy and needy, often stupid and always fallible. Perhaps we need a benign AI government designed and built by Tesla's engineers. Charge it up and see how it goes. Let the logic of the machines rule, drive things forward or at least steer us blindly in some general direction consistent with what might be "best for us" according to the algorithms. Ach, who cares? We're now soaring above Scottish politics, it's just that we're doing it at the grass roots level.
Posted by impossible songs at 8:42 AM
Email ThisBlogThis!Share to TwitterShare to FacebookShare to Pinterest