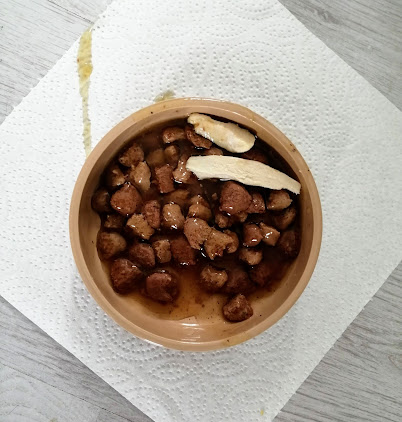 Cat's are fussy buggers. Our two have lost their taste for the posh cat foods, marketed with sophisticated human sensibilities in mind but designed for the feline animal appetites. Now we're onto Asda Tiger meaty chunks in rich gravy, the Aldi equivalent is equally prized but harder to come by (Aldi's inventory balance being a lot more volatile).

The gourmet sachets and tubs have experienced the unclipped claws of customer betrayal and are now sniffed and ignored, the cat's just want some basic chewy meat from unknown sources and the fatty gravy. Those high end "recipes" with the stupid names and prime cuts no longer make it.

I'm fine with that but the cheaper cat food does stink, at both ends of the process and of course neither posh nor economy are as good as a succulent fresh vole, mouse or baby blue tit. Wash all cat food contaminated fingers diligently after use.

Oh, here's a link to the banned study piece on Scottish Independence by Scott and Chapman, that's nothing much to do with cat food of course but I'm parking it here anyway, mainly because it seems that "they" don't want it to be read or shared ... or do they?

Posted by impossible songs at 9:00 AM
Email ThisBlogThis!Share to TwitterShare to FacebookShare to Pinterest

Impossiblesongs · Off The Rails (remix)