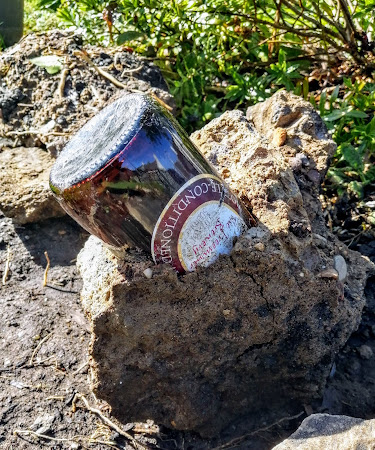 A very  interesting archaeological discovery was made today in the ancient foundations of the chicken coop that once stood proud against the ravages of time at the bottom of our medieval garden. An early 21st century craft beer bottle was found whole and embedded, not in amber as is customary with this sort of find but in a mysterious substance that I suspect to be incorrectly mixed Blue Circle cement/concrete.

The bottle's original contents were gone however and it was filled only with a murky brown liquid that may well be muddy water. We await the results of the chemical analysis and the carbon dating process. The humans that placed this object there are now long gone and there are few remaining traces of their clearly primitive civilization, their artifacts and dark religious practices.

All we can do is gaze in wonder at the little that remains of a baffling lifestyle and hope that other forms of historical evidence or clues pointing to whatever purpose they may have had in their bizarre lives will be discovered as the excavations continue. Scottish history remains a baffling conundrum of conflicting fact, fiction and fabrication. Were they the good guys or the bad guys in the warped weave of the colonial tweed, or just hapless victims? If only a reputable intellect like Neil Oliver could shed some light on historical events with a well photographed but vacuous TV show.

I've already been in contact with the Discovery Channel and I can say (in the strictest confidence) that the offers are pouring in from museums and institutions all across the globe for this priceless and culturally significant object. You just never know what treasures are hidden there, maybe only a few inches below your tired and itchy feet as you mow the battered lawn.

Posted by impossible songs at 8:53 AM
Email ThisBlogThis!Share to TwitterShare to FacebookShare to Pinterest