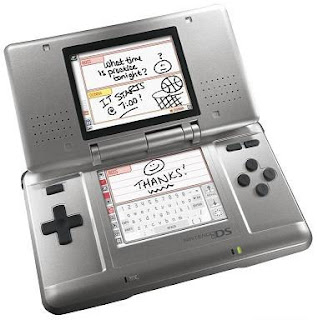 Today I’ve discovered a new game to play on the Nintendo DS, namely taking it apart and putting it together on a regular basis. After the first three hours of fiddling however it does get a bit tedious especially when you make no progress at all in fixing the defect, in this case a damaged top screen. So I’ve taken the bloody screen out and reconnected it, at all three points about fifteen times, I’ve screwed the whole thing back together and fired it up but the newly purchased replacement screen refuses quite steadfastly to play. Probably if I were a Chinese 11 year old the repair job would have taken few seconds but for the likes of me, middle aged and cack-handed it is simply too much. It seems that even my wide ranging experiences gained in my teenage years of working within the emerging Scottish electronics industry (Bournes potentiometers 1973 –1975) has done me no good at all. It looks like it’s back to Ebay or Amazon for a replacement and no capable dad brownie points scored whatsoever.

Take a pot of red meat mince, mushrooms, sweet potatoes, onions, various elements of sauce, rice and a generous portion of carbon footprint and you have the newly introduced Gay Boy Chilli. The secret ingredient in the actual Gay Boy Sauce, about which we can say or reveal very little other than it is primarily vegetable based (thankfully) and is tomato orientated. After 8 hours of rampant hunger and unsuccessful Nintendo repairs it works a treat with bottle of Sicilian red wine, a cat staring at you and a portion of boiled rice.
Posted by impossible songs at 8:46 PM
Email ThisBlogThis!Share to TwitterShare to FacebookShare to Pinterest