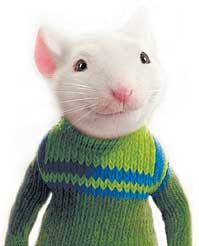 Today a local mouse was made rather unhappy; firstly by two kittens who were rather unsure as to why they were picking on him, other than some basic instinct was at work. The other reason being that these kittens had panicked him into running into even more danger (our house) and therefore far away from his own natural habitat and a place of comparative safety. The kittens really have no idea what to do with a mouse once they’ve cornered it. Killing it is a possibility (this was tried on Monday and seemed to work), but as their concepts of life and death are vague they preferred on this occasion to have some kitty fun with the mouse. At the moment the mouse is seeking political asylum beneath the washing machine (formerly known as the great white robot). In what may be the beginning of a long running Mexican standoff, the kittens are standing guard, unsure as to what may happen next.

I should also mention that the mouse first appeared in the house just as I was about to dish up a late tea for myself. There was a sharp squeak noise followed by a kitten carrying a complaining mouse through the kitchen cat flap. The mouse then escaped from the cat and tried to hide under a curtain, this confused the cats (the other was by now on the scene) and they were stuck without a plan. I had no option but to ignore my meal and try to rescue the mouse, however my attempts failed and he fled deeper into the house, all the way across it to the front door. Alas then he was caught again by a cat and I managed to chase both out of the house through the back door. All went quiet for a few minutes until in an act of wanton insanity the mouse ran back into the house (under the back door) and headed for the laundry room. It was some time before the puzzled kittens realized what had happened and came back in themselves. Somehow they sensed the mouse was under the washer and now the psychological battle between rodent and feline minds has begun.

I ate a late tea and closed the kitchen door; I’ll pop my head round later this evening to see what progress has been made. (In the end the unhappy mouse sadly became even more unhappy and "disappeared" dispute my efforts to rescue him).

The recent high winds moved our large trampoline completely across the garden, a distance about fifty feet onto the middle of the lawn. There it now sits, a little bent but in an upright position and ready for the first springs of spring. The strategy to move the trampoline back to it’s rightful place has not been formed yet. As I recall it took four strong men (none of which was me) to put it in place when we moved house last year. It strikes me that another strong wind blowing in the opposite direction might do the job and so confirm to me the existence of a natural cycle of and for all things. I wonder how long I’ll have to wait for this to happen.
Posted by impossible songs at 10:09 PM
Email ThisBlogThis!Share to TwitterShare to FacebookShare to Pinterest