It's people not animals who farm 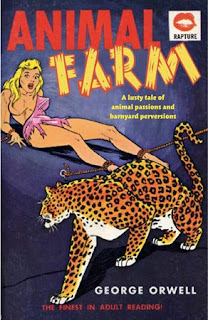 The TV weather girls and men are in hysterics because a small amount of snow has fallen on the East Coast. It’s hard to imagine them getting any more excited if UFOs had landed instead of the snow. As usual it’s the pale, watery, unusable snow that we always get stuck with in this country – not that I’m complaining about snow, just the slow news day faux-excitement. In Ohio or Idaho or Fargo a fall of snow means 10 foot drifts for weeks, if that were to happen here it would require a completely different winter lifestyle and a better standard of news reporting.

Yesterday morning was taken up with the surgical removal of the Christmas tree, firstly from the safety of it’s base and then from the safety of the house. Both departures were greeted with disapproval by the poor tree, now past its best and so it showered me and a vast area of the floor with green spines in silent protest. It is now deep in the forest ready to be called upon to play its final role in some family celebrations by getting chucked onto an early spring bonfire. It was a good tree but by the 3rd of January, Christmas is a distant memory and the tree is well and truly redundant in our lives.

I’ve ordered a new flat screen for a Nintendo DS, a New Year casualty that was brought on by a sudden impact with the tiles of the fireplace. Now my full range of electrical skills will be put to the test once it arrives, much fiddling, squinting and swearing will also follow. The (good but broken) PC is next on the list of things to repair – or contract out as the case may be.

The old fifties Halas and Bachelor cartoon version this story was on TV over the holiday. As grim and as stark an adaptation as you’ll get, almost in the minimalist style of some Ministry of Information film but powerful none the less. I wonder what today’s students make of it’s eternal messages of revolution and despair, of triumph over oppression succeeding only in oppressing others. A wise man once said, "all power is tyranny" I wonder who he was? By the way the illustration above is (sadly) not the actual book cover but a funky little piece of re-realization that takes a completely different view of the title’ s meaning.
Posted by impossible songs at 11:40 AM
Email ThisBlogThis!Share to TwitterShare to FacebookShare to Pinterest