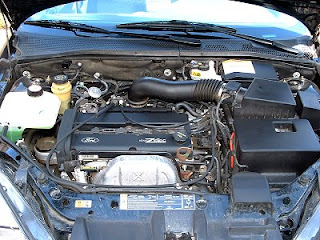 A new and hairy pussycat has come to stay with, we don't know for how long but his name is Mr Cougar and unlike the smaller variety of cats we own he doesn't chase mice - yet. He also has a rather nice Ford Zetec 2.0 engine which purrs most of the time, hopefully it will be a long while before it clanks, pings or even worse clonks. The purring is a good sign, my limited experience of real cats and real cars tells me so.

His first run out into the wild was to Ikea on Saturday as part of a small convoy (one other). Like many families we arrived there, shuffled around, sat on things, lay on things and queued for various kinds of warm foodstuffs. We exhibited the classic "grand-mall confusion and size unbelief" as well as "mild indecision" and some "loss of bearings". We also drank weak coffee and bumped into fellow customers carrying trays of similar food items. The kids ate squishy ice cream (which I failed to capitalise on) and my daughter Erin got an unexpected bargain. After a while we emerged, blinking back into the sunlight and then crammed our well chosen and ultra useful things (two stuffed hedgehogs, a rat, shelves, frames, a rug, two plants and a mail box) into Mr Cougar's large boot.

We went home and unloaded - shopping is quite simple and pleasant really. The Ikea food effect wore of and as tea time beckoned I surprised myself and a few other people by somewhat experimentally, nicely roasting some sweet potatoes, peppers and onions in honey, all to go along with the previous night's left over home botched curry - now strangely enough more tasty and potent. It was possibly the best meal of the month and if I hadn't had to head over to Fife it would have laid me out nicely on the couch for the rest of the evening.
Posted by impossible songs at 8:20 PM
Email ThisBlogThis!Share to TwitterShare to FacebookShare to Pinterest