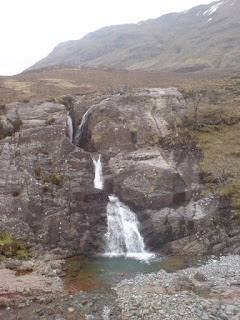 I can confirm it, the rumour is true: "She's a waterfall".

Wednesday already when it's really Tuesday and a cold mist has descended into my nostrils and the raw salad palette at the back of my throat. If it was Monday I'd be fine but the money wont be in the bank until Thursday and on Friday I have to catch the cats. What a week to lose touch with the concept of time, the annoying length of my fingers and the angry, pointless rant that would usually follow. Next week at this time it will be my Christmas birthday, all my dreams may come true and a foreign country will seem like home for a few short (59 minute) hours.

I did visit Glencoe and it only cost me £15 to get out of there. It was bleak but enjoyable, a bit like Pittenweem. Next time I'll take a jacket and full membership of the National Truss for Alba before asking for political asylum. Meanwhile I regarded the waterfall, encountered many a slip and found it all rather pleasing. Some day soon I'll be seen blethering to myself on the fast lane of the M5.
Posted by impossible songs at 7:50 PM
Email ThisBlogThis!Share to TwitterShare to FacebookShare to Pinterest