Dawn of the thin atmospheric paths from the trails of the replicants that scrape the horizon.
More than anything else today has been a thin day. That's not thin in the body image or mass stakes but thin in the general lack of substance that has hung over. Thin weather, neither one type or the other, thin air, thin conversation and exchanges covering up the possibility that I am slowly becoming a ghost. A thin ghost. Perhaps it's to do with the confusing seasons of the spirit that collide in what for some is Holy Week and for others a reason to buy chocolate bunnies and spring themed cards. That devout and dimwitted thinness will have stretched to it's limit by Monday as the holiday expires and the next thin theme rotates into place.

I'm all for socks being sold in clumps of three rather than pairs of two, it's been suggested but it needs doing. On reflection is that just the same as buying three pairs and stuffing them all in the drawer in the haphazard and disrespectful way that socks are usually treated.

Missie the new cat has finally decided that I'm not an immediate threat to her health and well being. She can now stay in the same room as me for short periods and doesn't run and hide should I invade her generally generous sense of space. She's also learned how to plunge through the cat portal known as the cat flap and make a feeble "mew" sound when requiring to be fed. All very civilised and pleasant and happening now. 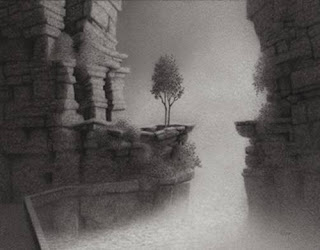 Views from thin windows and the typical artistic fog.
Posted by impossible songs at 6:55 PM
Email ThisBlogThis!Share to TwitterShare to FacebookShare to Pinterest