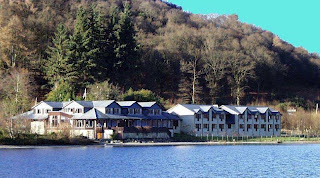 Working away from home on the west side for a couple of days but now home and clothed and in my right mind, temporarily. My hotel contained an almost sophisticated but wholly infuriating plumbing system. Labelled as "eco" in numerous places (and anything but), the taps worked by push button and the bath and shower had a large control panel. Of course pressing buttons simply results in a timed flow of water that then stops and so you press again and again, wasting water and becoming more annoyed at the same time. The bath just fills itself but only in a choice of three temperatures, the shower veered alarmingly from cold to hot for no apparent reason. It was a bit like getting washed within some Woody Allen script set in a push button future. By the comments made by some of the other guests I'm sure the management regret splashing out a futuristic set up that's already out of date. Nice duck and lentil salad though.
What do you get if you mix 6 pints of IPA, a gin and tonic, duck salad (as above) and maple syrup ice cream? A good nights sleep, waking bright eyed and bewildered in the morning and a misplaced mobile phone.
Posted by impossible songs at 7:03 PM
Email ThisBlogThis!Share to TwitterShare to FacebookShare to Pinterest