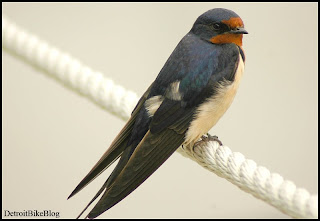 It's the old story, sometimes you fall flat out on your back, other times you land flat on your face. Early this morning I devised what I considered to be a foolproof plan to prevent our cats from pestering the swifts that are currently nesting in the coal cellar. Normally the cellar door is left wide open allowing easy access to birds, cats and the occasional toad. I thought that if I partly closed the door and blocked the lower part with some timber the birds could fly into the gap left at the top and the cats would be unable to get in. I did this using bits of an old pallet and some luggage ties, the end result looked impregnable.

On coming home tonight I discovered a dead swift in the downstairs toilet (and an unrelated dead mouse on the rug), my plan had failed. Clearly the restricted door gap now gave the cats a much better advantage, as the bird now had a smaller gap to get through, how come I didn't see that one coming? Outwitted by a cat.

Short but sweet musical interlude last night at the Ark on Waterloo Place. Miss Fi did a spot in the sunlit upper room showcasing the mighty range of her song writing skills, guitar styles and voices most effectively. Mr Norman Lamont ably assisted on bass and backing vocals. We had to leave early so missed the rest of the package but it was nice to get out to (what I think was) the first OOTB thing I've been to in ages. Edinburgh chanteuse Rosie Bell shared our table and we'd a nice wee chat about things in general, politics, music and her blog: for Rosie Bell click here.
Posted by impossible songs at 9:48 PM
Email ThisBlogThis!Share to TwitterShare to FacebookShare to Pinterest