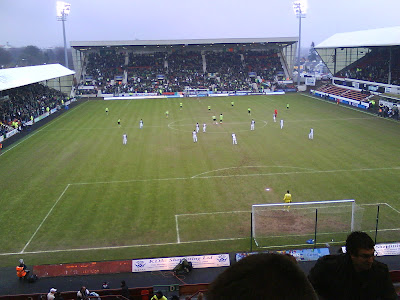 DAFC line up against a makeshift and under performing Celtic side in the cup, the eventual outcome was inevitable however.
Fitba

There's nothing quite like a good blood and snotters football match to keep you connected with real life and real people. Not that I feel particularly disconnected at the moment but a Sabbath Day session on the H&S sanitised concrete terraces allows you to catch up with Central Scotland's best banter and most oblique opinions. So as I watched what turned out to be an entertaining game I re-learned the numerous sharp and ingenious terms used in current racial, religious, gender and political verbal abuse. The killer guilt punch in this experience being that mischievous and ruinous feeling of inner conflict enjoyed when quietly laughing along at the various chants and one-liners that floated across my head and into my brain. Our senior politicians, social commentators and moralists should sneak into our football stadiums now and again and mix with the underclass (the one that most of us belong to) in this boiling pot of magnificent verbal colour and general wanton incorrectness - just for the fun and hell of it.

Does this count as five pieces of fruit a day? 3 Bounty bars, 1 red berry muffin and a half glass of pineapple and banana smoothie - in my re-engineered, brave and surreal new world it certainly would.
Posted by impossible songs at 8:06 PM
Email ThisBlogThis!Share to TwitterShare to FacebookShare to Pinterest