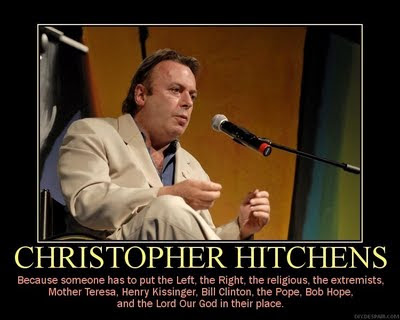 "I have one consistency, which is [being] against the totalitarian - on the left and on the right. The totalitarian, to me, is the enemy - the one that's absolute, the one that wants control over the inside of your head, not just your actions and your taxes. And the origins of that are theocratic, obviously. The beginning of that is the idea that there is a supreme leader, or infallible pope, or a chief rabbi, or whatever, who can ventriloquise the divine and tell us what to do.

That has secular forms, with gurus and dictators, of course, but it's essentially the same. There have been some thinkers - Orwell is pre-eminent - who understood that, unfortunately, there is innate in humans a strong tendency to worship, to become abject. So we're not just fighting the dictators. We're criticising our fellow humans for trying to short-cut, to make their lives simpler, by surrendering and saying, "[If] you offer me bliss, of course I'm going to give up some of my mental freedom for that." We say it's a false bargain: you'll get nothing. You're a fool."

From the New Statesman, interview by Richard Dawkins
Posted by impossible songs at 10:18 PM
Email ThisBlogThis!Share to TwitterShare to FacebookShare to Pinterest