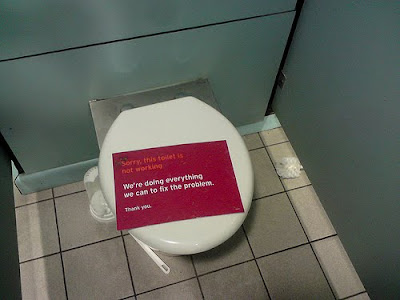 (Stock photo nicked from somewhere - I didn't actually visit any of these troubled cubicles)
It's every young and pimply store manager's nightmare, the busiest shopping day in world history, crowds of frantic shoppers bamboozled by their Christmas purchasing choices and what happens? All the loos fail, upstairs, downstairs, in the cafe and in my lady's chamber. Puzzled tweed wearing pensioners, tweens and yummy mummys stare in disbelief at the neatly typed notices - all those pots of tea, cold Cokes and warm lattes have to end up somewhere but for today it wont be into the Sainsbury's drainage system at Edinburgh's Craigleith retail outlet. A stores spokesman said later "it was the wrong kind of shit." I think I know what he means.
Thankfully my visit to this newly developed flagship store was short, sweet and without any need for a toilet break. The shopping experience being from a bizarrely deconstructed half remembered list; toys from my pals at the "Merchants of Death" (whom I'm bound to support, we must fill that black hole because that dunderhead Osborne wont), 2 x Vanilla Yops, a three foot long French stick, a packet of baby-grows, Trebor strong mints and a gift voucher for some rival high street emporium.
Today it snowed, that seemed to bring out some of the more extreme lunatic driving styles in the capital; an angry young man in a Focus who was wheel spinning for no obvious reason (I fully expect that he ended up on his roof somewhere later in the day), a puzzled SEAT driver with no spacial awareness and a SAAB estate that was lane changing in a rather erratic manner, oh and the Mini with an exhaust that seemed to be held on by elastic bands. All that was in the space of five minutes heading north on the A90. Nothing unusual there then.
Posted by impossible songs at 6:08 PM
Email ThisBlogThis!Share to TwitterShare to FacebookShare to Pinterest