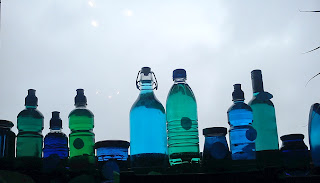 Art: The blues and greens of some undersea world, corked and captured in an artistic window sill piece that uses the sky and the northern rain as a backcloth and the warmth and fun of a family room as a context.


Football: The tribal pulling power of football is a hard magnet to resist. I get pulled in all the time, whether it's laughing at the hapless and criminal efforts of Glasgow Rangers squirming on their self inflicted hook or watching Spain, Italy or England struggle or triumph in Euro 2012. The primal need to support and feel superior, the heartless disregard for the loser or the pain and empty innards that come with loss and defeat. Concentration comes and goes, stars shine and dim, sweat gives way to a cold fear and the long walk back – from the TV to the couch to the kitchen to the couch as the second half loads up and runs. I make my own substitutes, send myself off, get fouled and kicked and then forget it all as if none of it had ever happened. Futile and pointless entertainment, skill, comedy and blind passion on display and pundits who talk like discarded newspaper back pages or angry drunks phoning in. Football in 2012, no better or worse than it ever was and no more relevant. At least nobody has to run around the country with a golden torch in a golden convoy in order to try to connect the spectacle with the common man, all you need are a coach load of young millionaires and an eager sponsor.
Posted by impossible songs at 8:55 PM
Email ThisBlogThis!Share to TwitterShare to FacebookShare to Pinterest