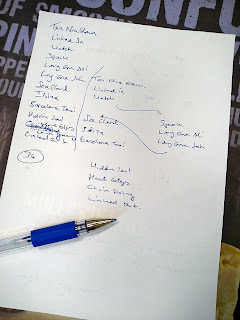 Performance indicators: At odd times this week I've been mixing music and generally fiddling with files and programmes in a desperate bid to squeeze some creative wonder juice from machine to machine and then out into the world but alas, I am already undone. It's the doubtful pleasure of working between the twin evils of Apple and Microsoft. Sometimes I don't know if I'm coming or going or ready to commit axe murder on some Chinese built piece of plastic and recycled metal. Windows always wants to stop, reboot, reinstall and then procrastinate, like having lunch will someone who cant quite coordinate talking and eating. Apple is like some stubborn psychopath who must have his own way and his own terms met, tells you so repeatedly and you then have to go along with it or else out comes the big knife. This isn't what you expect from IT (well it is because it's been doing it for bloody years). In some naive future fantasy I've spawned I imagine that somehow all IT will be straightforward, benign and simple to use, it will anticipate problems and glide through tasks. We will be like gods as we walk amongst the bright shining screens and images installed in our dwellings, the smoothly running electric servants that have captured our ideas and wishes then uses them to turn on the microwave or knock off a quick novel or two by reading our wonderful thoughts. This would be progress. Until then it's as if we've been kidnapped by two malevolent powers, neither really wants the ransom money, they just want the pleasure of witnessing your slow torture as you try but fail to anticipate their next fiendish and twisted move. Of course there is always the PC and right-on solution of Ubuntu but that's a bit like having to learn fluent rhinoceros in order to type a telegram onto toast and then send it to a penguin in South Georgia - and about as much fun.
Posted by impossible songs at 9:29 PM
Email ThisBlogThis!Share to TwitterShare to FacebookShare to Pinterest