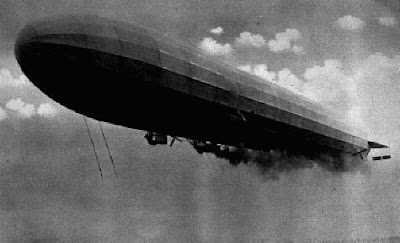 A recurring dream, a crew member on an airship, poking through the fog, crossing the Atlantic, setting records and living on the edge of a great hydrogen filled bag of danger. It's the nineteen twenties but the Great War is still raging. Nobody could stop the trench warfare, nobody could cancel anything out even though you'd think all that military and industrial power would've some how done so long ago. And me, I'm still on the airship on a secret mission. I need to eat less toasted cheese around bedtime. I need to make a cheese free promise to myself. It also makes you /me wonder when it was that people started using the word "environment" in the way they do, I never did hear it when I was at school. So now I'm watching the thriller "Hunter" on the BBC; I heard the phrase used  in this blog post title, I'm applying it to various things now. It makes sense.
Posted by impossible songs at 9:36 PM
Email ThisBlogThis!Share to TwitterShare to FacebookShare to Pinterest