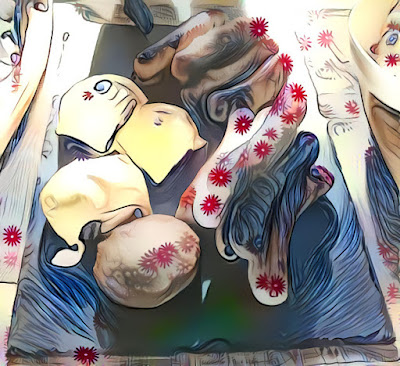 Abandoned cartoon food being consumed by unexpected red soot spiders (clearly mutated in some way) but based of the characters created by Hayao Miyazaki in Spirited Away. The food is typical of what you might find served up on a nightly basis in any good quality, ethereal and ghostly bath-house you've accidentally stumbled into into whilst taking a break on a long car journey. Of course had you taken up the full serving, over indulged and eaten it all you'd have been magically turned into a pig and that's a problem. You see cartoon food can only spoil the soul, redemption after that is tough.

P.S. All dead on popular laugh tracks: Current comedy shows using canned laugh tracks from audiences recorded in the 60s, people laughed better in those days apparently. They felt freer to laugh before identity politics and a woke and critical mentality arrived. Now they're all dead, but still laughing, that's not really funny when you think about it.
Posted by impossible songs at 3:07 PM
Email ThisBlogThis!Share to TwitterShare to FacebookShare to Pinterest