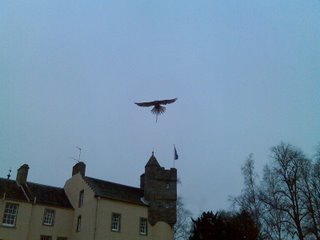 In the picture a falcon hovers above my head at Myers Castle, Auchtermuchty. A great start for the 36 hour long New Year party we attended there. We participated in falconry, clay pigeon shooting, snooker, music, dancing, listened to pipers, ate endless fine food and drank good wine, rainy dog walks, watched DVDs and fireworks, saw storms and enjoyed good humoured and hospitable company. The kids had the time of their lives as the adults boogied and blethered in the magnificent surroundings, Scotland’s hidden treasure? I think we’ve found it.

The rich drama of life of course never ends even during holidays, news of unmentionable things filtered through but we took them in our stride and bounced back as you have to. A power cut however had torn a black wound across West Lothian and when we returned home from Myers our stone cold house had been cut off for 24 hours, as had the nearby villages. We made a few calls, had a few thoughts and returned to the warmth of Fife for few hours of couch life, TV and chat with my oldest son and his wife (and grandson) and a Chinese carryout.

Highlights of the weekend:

Ali’s 15 out of a possible 20 at clay pigeon shooting (just don’t argue with her anywhere near a loaded gun).
Joe winning four out of four games of snooker on a full sized table (don’t put your money on the table).
Liv’s treasured trinket turning up, under a leaf on a muddy path half a mile away, a day after being lost (don’t ask).
Very small children running, jumping and repeating everything you say.
The power coming back on, just as we were about to give up on things at five past ten last night.

Posted by impossible songs at 6:46 PM
Email ThisBlogThis!Share to TwitterShare to FacebookShare to Pinterest