Not a Stone Roses T Shirt 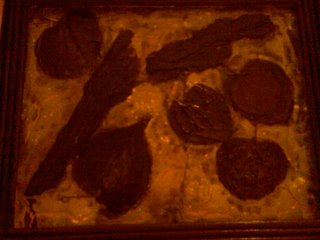 Friday: The surgical removal of a Christmas tree from a house is never easy, and so despite many careful measures a huge mess was made everywhere. A vast, new green carpet forming an ambient path of natural waste products from the lounge to the back door and beyond into the countryside was created. I have not informed SEPA yet. A passage from Macbeth springs to mind. The Hoover was red-hot but thankfully did not give up. On a brighter note myself, the twins and grandson number two, played a number of jumping games, ran along corridors and in a nearby McDonalds drew some pretty decent pictures of monsters in crayon.

Saturday: A visit to rainy Manchester via Mazda Lear Jet to see baby Thomas and his proud parents. What a good baby he is. In the afternoon (after a sleep in of sorts) we visited a load of what I used to call “head shops” in the artistic quarter of the city. It was good fun and thankfully nobody was injured by my vast golfing and unsuitable for city centres umbrella. We also went on a bus, ate cakes, were shut out of the Chinese Art Gallery and for a brief time were captive passengers in an1988 Nissan Sunny listening to Radio 4, not your normal Impossible Songs day. We had tea in the Led Zeppelin pub (or somewhere in Chorlton, Old Trafford) a haunt of Badly Drawn Boy who apparently lives next door. I’d recommend the fish pie as it contains lots of fish. As per Friday we all drew monster pictures during the early stages of the meal.

Sunday: Returned home in the small hours through a rainstorm that started near Preston on the M6 and didn’t really end, ever. The cat, who has been AWOL for a few days, welcomed us home in the usual clawy, clingy way and then we slept as best we could. A late breakfast consisted of scrambled eggs and toast (Ali style), mulling over John Lewis bedding options and getting rid of a hundred unwanted emails. Outside the wild birds are feasting and the deer are winter grazing in the nearby paddock. The time now is 13:15. Goodbye.

Posted by impossible songs at 1:14 PM
Email ThisBlogThis!Share to TwitterShare to FacebookShare to Pinterest