Loch Lomond and the great warming 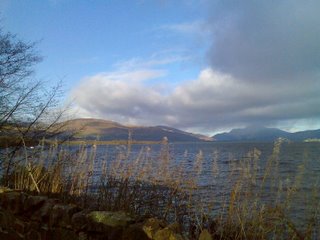 Loch Lomond and the great warming

Stopped of for a late lunch break by the banks of Loch Lomond. Jeremy Vine was on the radio discussing carbon footprints, the issue of increased airline traffic, Chelsea tractors and the like. On a mild day with the loch extra full of water and the Duck Bay Marina car park flooded (as it has been since 1972) it all seemed a bit too real. To make matters worse I was driving a Landrover and wearing a suit. Some expert was talking about no longer flying but using “surface transport”. Now that she’s been all over the world, flying I presume, she’d now rather not now and is advocating ferries and trains and public transport be used to cross Europe for holiday trips. Clearly she’s never had a normal job with fixed holidays or holidayed or travelled anywhere with small children. Pity help us if she is typical of the policy makers.

Much as I’d like to get more enthused over green issues I can’t. I just remain ambivalent and undecided about things. Snooty, green, stereo-typical activists just back from their gap year spouting impractical suggestions don’t help sell them. It seems to me that say (if or when) the Gulf Stream fails and the ice (cream) age looms up on us, somehow a solution will be found from man’s endless stream of clever/dumb ideas:

a) Replicate the Gulf Stream with a giant hair drier from the Equatorial regions that pipes heat up to Europe.
b) Use the hydrogen in the ice to generate heat in our “ice cities”.
c) Colonise the moon.
d) Colonise the sea bed.
e) Build giant eco-bubbles that we can live in.
f) Move to Australia, nothing seems to be happening there.

All in all it’s a bid rough to blame all this on Easy-jet and Ryan-air the poor, greedy workers all wanting two weeks in Tenerife and a long boozy weekend in Prague now and again.

A nondescript week. That awful week when holidays are over, work resumes, money has evaporated, a speeding fine and the cold grey winter biting at your ankles and nether regions. The only bright spots this week have been Dunfermline’s freak but welcome cup result against idiot Rangers and a couple of decent reviews for us on Garage Band. Other than that it’s heads down and get by.

Posted by impossible songs at 7:36 PM
Email ThisBlogThis!Share to TwitterShare to FacebookShare to Pinterest