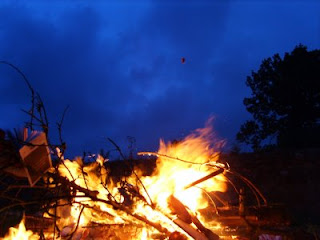 Spent the evening in a Greek restaurant in London, Meke was on the menu, a series of small, eclectic dishes of all sorts served up to our party (of six). The meal was followed by a visit to a busy central London pub (the Plough) where punters were spilled out across the pavement on the thundery heat of a June evening. Of course the conversations became more fractured and convoluted as the evening burned down and the drinks kicked in. Then home (?) to a £150 hotel room reminiscent of a cabin on a Trident submarine sitting at station under the North Pole. Hot, sticky, ventilated by who knows what and not big enough to swing any kind of feline creature in. Very glad to get home on Thursday evening.

The “let’s celebrate the end of the Ferry Fringe Party” took place at our house. A host of local luminaries, comedians, musicians and artistic types turned out to eat, drink and party in the faltering June weather to mark the end of the festival weekend. I’d written off any prospect of a bbq earlier in the day but the dream of a bonfire prevailed and of course took place despite a persistent drizzle. We burned all the surplus festival paraphernalia, fired of a few sparklers and drank lots of beer. Indoors, once the drinks kicked in, a series of impromptu musical events began, these took the form of:

An improvised piano piece and the “Crocodile Song” from Cloudland Blue Quartet and young Finn, roots and blues of the highest calibre from Confushion, subversion and satire from Tommy Mackay, Ivor Cutlery/Norman Lamont sharing the same stage and (briefly) the same body, Impossible Songs fiddling across a fuzzy landscape and Fraser and Karen's Joe intervening from time to time with bursts of staccato and well fitted harmonica. Oh! How we danced and around two in the morning, fell asleep.
Posted by impossible songs at 3:50 PM
Email ThisBlogThis!Share to TwitterShare to FacebookShare to Pinterest