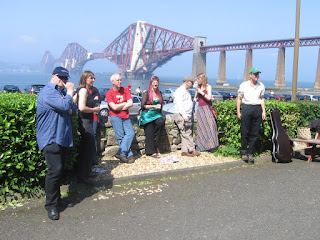 Some of the finest (aye! why not say that?) musicians you’ll ever meet gather under the Forth Bridge. 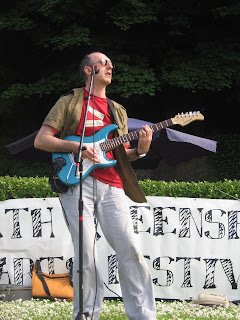 Norman rocks out some impossible songs and an afternoon photo collage follows on...

impossible songs
The arts festival, Ferry Fringe has bowed out and seems to have been a rather jolly and successful few days of arts festivaling. Tons of hard work went into putting the programme together and sustaining it with many vital participants, the main hero being Norman Lamont the hard working and forever harassed chairman who rocked out rather nicely on Saturday afternoon as we all played in what looked like a small field of daisies two feet deep outside the Two Bridges Hotel. Thanks to all who played on the afternoon: Tommy Mackay, Cloudland Blue Quartet (he did the photo montage), Sparrahawk, James Whyte, Lindsay Sugden and Karen Austin, Confushion (John and Fraser), Norman Lamont and Impossible Songs.

Sadly I missed the rather good sounding SQAF open mike event but I did manage a rare episode of Dr Who and a peek at Chronicles of Rock re-telling music history in a distinctly oblique and untrue way. The Sabbs invented heavy metal? I beg to differ, as I recall I was there at the birth at the Caird Hall, Dundee in 1971 when a violin bow struck an E chord on a sunburst Les Paul 1954 Original plugged into 1000 watts of WEM amplifiers. From that evening my life was never quite the same but then I’m not the one making TV programmes. History is of course written by the victors and those with the right amount of clout on BBC2.

A weekend of much carrot consumption, a sponsored walk (in the rain) on the Forth Bridge, a strange but pleasant soupy Sunday lunch with Tommy and Caroline, deciding that I’m on the verge of being mildly obsessive, strimming thistles and weeds, observing swifts nesting in the coal cellar, a protracted on line Tesco order, a brief dinosaur hunt with a grandson, a double sausage and brown sauce roll, a long daisy chain, one dead rabbit, no newspapers read at all, sorting out our PA and recording gear (at last), Greek yoghurt and honey and few noggins of lager shandy and red wine.
Posted by impossible songs at 9:42 PM
Email ThisBlogThis!Share to TwitterShare to FacebookShare to Pinterest