Dancing on the Forth Bridge 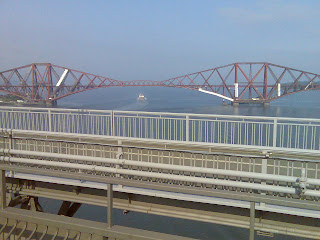 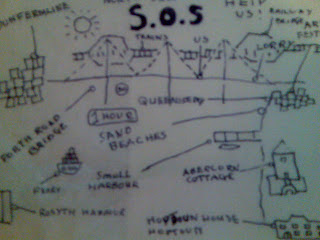 Not your average Friday really, I spent the morning in the company of fellow Ferry Fringe committee members distributing art exhibits around the pubs and shops of the ‘Ferry. Being with two such committed comedians as Jo Jo Sutherland and Tommy Mackay made it all pretty good fun and a useful learning experience. The previous night we’d all put together a decent open festival show, the highlights of which were of course the aforementioned Mr Mackay, Ivor Cutlery (the first and only Ivor Cutler tribute band) and a Scott Renton ensemble. The spicy Moroccan food and cheap drink went down well and Ali and I were exhausted by the time we finally made it home. Anyway back to today and next on the agenda was a publicity session with the Ferry Cheerleaders, Ali, Gowan Calder and I shepherded these enthusiastic girls around a series of locations, the Boat Steps, the High Street, Scotmid and finally for an encore outside the great blue beast that is the local Tesco. A surreal end to the afternoon.

The next odd experience of the day was finding ourselves stuck in the middle of the Forth Bridge in stationary traffic for one and a half hours. In scenes reminiscent of 28 Days Later we wandered on the surface of the normally thumping bridge as a serious road accident was cleared from the Southern bound carriageway. The weather became suddenly brilliant and the views and atmosphere both unique and unworldly. To add to this people stepped out of their cars and actually talked to one another, Lotus owners spoke to Skoda drivers, truckers to bikers and car drivers conversed with bus passengers who had for the evening abandoned their buses and become pedestrians on the adjacent walkway. My own young passengers Joseph and Olivia marvelled in this weird atmosphere, it was a bit like suddenly finding yourself standing in the middle of a frozen lake and Joseph composed an SOS note (as above) just in case things got out of hand. As it happened we braved the worst that the traffic gods could throw at us and made it home in time to see the second half of the Simpsons and eat a pizza and ravioli tea.
Posted by impossible songs at 8:39 PM
Email ThisBlogThis!Share to TwitterShare to FacebookShare to Pinterest