Brian Wilson would be proud 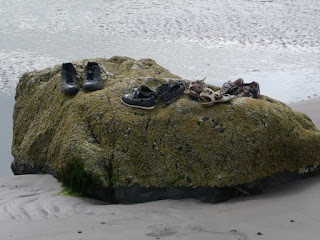 Shoes in no particular order on a rock on a beach. 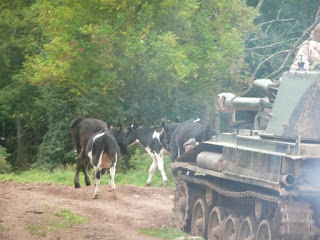 Cows v a tank, not as simple a situation as you might think.

Lay around recovering from the weekend last night eating fish pie and watching " Michael Clayton", not a relaxing film at all but worth the watch. So tensed up and tired it was an almost early night until the heavens opened at 6am and the rain battering on the roof overcame my natural desire to sleep.

I sat down at the PC thinking I had a lot to say but in a moment all my valued and random thoughts escaped like butterflies from a jar so alas I have little to write (as usual) unless some moment of clear thinking and illumination occurs.

Today at work was less than straight forward and I wondered where on earth July 2008 had gone and if we'd ever see it's like again. I thought about aeroplanes and the pavements of New York, taxi cabs and handing over foreign money and being unsure of the change to come. I pictured more rain and then hot, sunny periods and the light reflecting on the pages of a book I had read in part and had now become bored with. Then I realised that all around was a fog and that the traffic's lights were on, though some drivers refused to bend to the pressure of their peers and stayed switched off.

I chose not to listen to music but to drift away and avoid contact with anything apart from things I could eat and drink and so it was Tuesday all along, as I suspected. It was then that I remembered about Brian Wilson's sandpit and began to think if such an artistic device could ever help the likes of me.
Posted by impossible songs at 7:50 PM
Email ThisBlogThis!Share to TwitterShare to FacebookShare to Pinterest