I am the chef 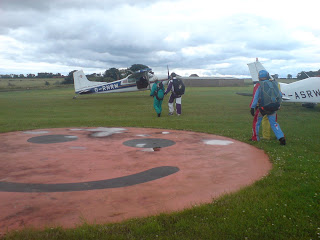 Following on from yesterday's near death experience only avoided thanks to a working parachute a small celebration was called for. Thankfully the weather held and we had a bbq/berry picking Sunday afternoon. I was on decent bbq form for a change and little if any food was burned and as I was driving later I remained none the worse for the demon drink. Could this be the secret of how to cook? Meanwhile Ali produced a storm of salads and crackers and deserts that seemed never ending and then led the assault on the berry bushes.

Various random children, grandchildren, friends and free loaders also took the opportunity to pick blackberries from our acres of untended garden. They picked berrys in shifts for about three hours and hardly made a dent on the huge crop. Next year we're calling in the boys from Ribena to carry out a harvest after which we will retire to the South of France laden with blue-stained wads of cash.

Food of the day - bbq chicken breast, slightly warmed in the oven first.
Guitar of the day - my renovated dobro fixed by "Fingers" Farrel.
Drink of the day - pink lemonade.
TV prog of the day - a dull episode of Top Gear (the only thing I saw).
Conversation of the day - Skipe call to Emma in Oz.
T Shirt of the day - Sponge Bob.
Vibration of the day - the old petrol lawnmower.
Posted by impossible songs at 7:57 PM
Email ThisBlogThis!Share to TwitterShare to FacebookShare to Pinterest