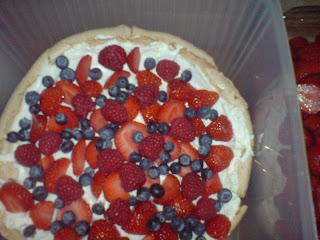 Over the weekend we ate a lot of raspberries, a fruit Ali describes as "Scottish". I suppose that in a certain north of Dundee, DC Thompson and Angus glens way they most certainly are. Once these soft berries are converted to jam they are, in my opinion best avoided. We also watched the film "Atonement", not exactly a laugh a minute affair but very watchable thanks to some fine cinematography and a decent cast, the overall experience was however a little bleak.

Home recordings: Following the Confushion brothers visit I dusted down the mighty MRS-802 to see what gems I'd last recorded (about 18 months ago) and I made up a list. In doing so I had to make up titles as most of the 16 tracks I found were in the key of anonymous. Some of them were actually OK and on the second listen usable perhaps. "Air Kisses", "Pools", "Eagles" and "Sugar" may at some point see the light of day either as ambient pieces or actual songs, you can never tell what will come out of a buried treasure trove (some best left buried perhaps). I also hooked up Dr Drum for an impromptu six track (may go to eight) version of the old Blind Faith (Steve Winwood) track "Can't find my way home". It comes in at an economical 2 minutes 5 seconds and features two guitar, two drum and two vocal tracks. The drum tracks include Dr Drum's fine "John Bonham" super gong sound at least twice, it may not make the final cut. I'm now thinking about a phased guitar for track seven, this amusement never ends.

Road Tax: If ever a government was set on cutting it's own throat it's this one, not content with bolstering a financial and fuel crisis with their inaction they are now set on upsetting 9 million MPV and 2 litre saloon owners by hiking up the tax on the congested potholed and gravel parking lots that used to be known as roads. Great, the only good news being that you'll now be able to buy that Range Rover you always promised yourself for about £500. Then you can stick it in your drive and live in it while renting out your house to homeless Americans on the run from Aunt Fannie-May.
Posted by impossible songs at 7:24 PM
Email ThisBlogThis!Share to TwitterShare to FacebookShare to Pinterest