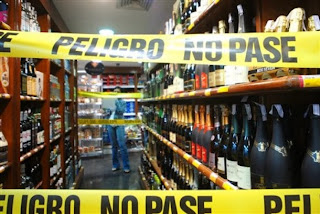 From today I'm on an alcohol holiday for at least a month. No wine, no beer, no lager or whisky, I'm dry. The suggestion was made by my doctor, not because I have a problem but because he thought it may be a good way to restore my energy levels and give my system a little break. He also gave me, at this routine check a clean bill of health so that was rather nice to hear, the only downside was the advice to "exercise until you sweat". This maybe means doing a bit more than stuffing a duvet into a cover whilst the heating is on so I'll be pumping up the bike tyres and getting out the garden shovel, as soon as the rain stops.

Mr Cougar has suffered a nasty little bump thanks to a rather disrespectful Citroen C2 that sneaked up and landed a cheeky punch on his front wing while he was innocently parked outside our house. It's new wing and a bit of spraying next week in the local cat's hospital. I was too traumatized by the whole thing to discuss it much at the time, such are the tiny joys and large shocks of budget motoring.

Tomorrow the schools, the libraries, the community centres and various other things are closed whilst those employed there, in support roles, have a nice day out on strike. Naturally they want more than a 2.5% pay rise and who wouldn't when inflation sits at over 4 and six Muller Fruit Corners are £2.95 (or two 6 packs for a fiver). Bring the government down I say, I'm bored with these dull Labour twats and their stiff necks and sense of humour failures, let's have a return to Tory sleaze and Nationalist bullying and little more gay banter from the LibDems.
Posted by impossible songs at 8:49 PM
Email ThisBlogThis!Share to TwitterShare to FacebookShare to Pinterest