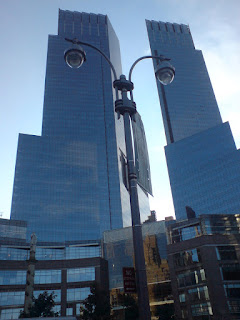 This tedious (for some) sequence of New York photos will probably run on for a few days. I think the best way to describe my current status would be "recovering", New York is an exhilarating and exhausting place, it seems that in a week we had (or at least I had) about six months of normal Central Scotland experiences crammed in, as a result I'm tired. Just to recap however here are a few favourites from the past week.

A lady singing an operatic warning from a luggage trolley in Newark Airport.
Frankenstein dancing to a Chilean piper's music in the street.
Kids doing hip-hop acrobatics in Central Park.
Four brilliant guitar shops in one street - more original Les Pauls and pre-CBS Strats than I've ever seen.
Two fried eggs, three pancakes, syrup and two sausages at the Galaxy Diner.
The audience cheering and clapping through "Dark Night" in a cinema on 42nd Street.
Extended helicopter flight over the city.
The Naked Cowboy of Times Sq.
Cinnamon Pretzels dipped in caramel.
Dali in MoMA (despite the crowds).
Rock and roll on the Beast boat.
Buying Mr Cougar an ioniser.
Sleep (when it came).
Posted by impossible songs at 4:03 PM
Email ThisBlogThis!Share to TwitterShare to FacebookShare to Pinterest