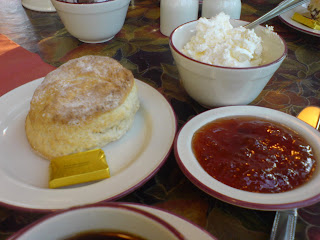 Another picture from an occasional food based series that I am unlikely to repeat.
The jam here somewhere or there on the right, served as part of a scone and jam and cream ensemble, is a new flavour I've never before encountered: Dumpsie Daisy. Fortunately it's not made from either dump (?) or daisies but a conglomeration of rhubarb, ginger, apple and plum. It tasted ok but it'll never beat strawberry in a straight fight. I'm not sure Dumpsie Daisy is a proper name at all the more I think about it - it should really be two schoolgirl characters in one of Ali's pre-war Dimsie Books.

We had to escape from our house to the nearby Garden Centre due to an unexpected funeral turning up and causing major congestion outside and so had to sample the delights of the cafe for an hour. Strangely it was full of grey and slow moving retired people bent on killing time and eating salad rolls and other (also retired) grandparents child minding for a day and wheeling the little monkeys around the shop.

The funeral traffic passed away and the muddy skid pan that we call a road is now deserted, the cats are settled down now, having not killed anything for about 6 hours and the washing machine leak and flood that threatened to destroy the day earlier on has gone, I hope.
Posted by impossible songs at 3:48 PM
Email ThisBlogThis!Share to TwitterShare to FacebookShare to Pinterest