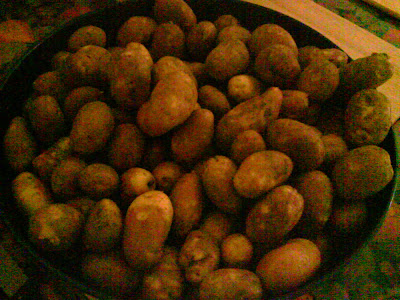 The last potato harvest has come in, just prior to the monsoon season restarting. Plums are next, in fact right on the cusp of harvesting now and the apples are following up at the rear. Then it's back to famine, pot noodles and cheese on toast.

Question: How long to you have to leave a loaf in the bread bin before it develops strange sweet smelling growths that are white and wispy like alien spiders webs?

Answer: Only a few days it would seem, well maybe a week at a push. It can happen though and when left to it's own devices domestic science never fails to prove it's point with mould, fungus and weird growth spurts.

Dumped this vid on Facebook a few minutes ago, it's about 18 minutes long but worth watching. Deserves to go viral as some might say.

Posted by impossible songs at 7:15 PM
Email ThisBlogThis!Share to TwitterShare to FacebookShare to Pinterest