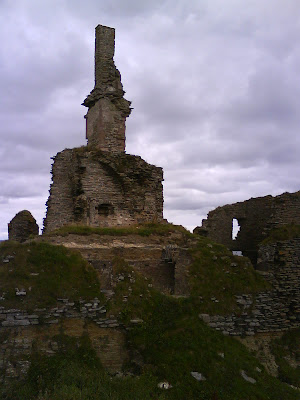 Farewell then to Scotland's international reputation, ruined for the time being by the actions of the theologically challenged and evangelical Mr MacAskill and the seedy and greasy Mr Salmond. Meanwhile the real power brokers stay deathly silent and remove themselves one or two degrees from the heat of the action and will remain there until the furore dies down. Uncomfortable times.

The rain returned with a vengeance beating down as I hurried over to the kingdom early this morning to deal with some unplanned working events. It was dripping down my nose in the early morning light and down my back: Must get me a Barbour and a sturdy 4 x 4 if I am to pursue this outdoor lifestyle successfully.

Next was an attempt at the classic Sunday morning occupation of goal post erection coupled with net untangling: this should really be an Olympic sport, done by teams of two, denied the essential Velcro, no ladder, ill matching uprights and crossbars, no mole clamps and done in a howling gale against the clock and under the disapproving eye of an eager referee. Surely a sport our beleaguered footballing nation could triumph in and in a small way we'd be involved in the beautiful game at some level, it might in fact enhance our crumbling coefficient. At the very least it could be part of the pre-match entertainment at the World Cup.

Lunch was provided by the local House-Elf garden centre, roll-mop herring, celery salad and a scone on jam. Just about odd enough to keep me going till the mince and tatties platter arrives tonight, it's a common enough meal amongst ethnic minority members and outcasts.
Posted by impossible songs at 5:59 PM
Email ThisBlogThis!Share to TwitterShare to FacebookShare to Pinterest