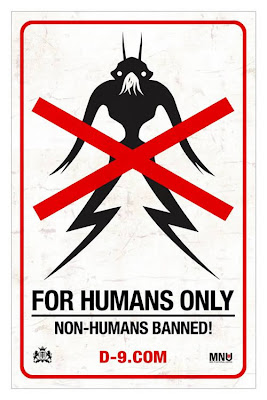 We spent a few idle hours last night watching (and squirming along to) District 9. The DVD has been innocently lying on the shelf for a few days, really it should have been in a bucket of iced water such is its incendiary (small screen for us) cinematic power. I was expecting some Sci-fi fun, action and the opportunity to make some judgements on set design and special effects. What I got was a shocking, disturbing, bombastic, stylish and emotionally charged epic that took me back to the styles of early (?) Sci-fi films such as Alien or Bladerunner or in terms of rough detail and shaky camera work, Blair Witch. It's a good feeling when you see something that is fresh and redefines a few of the normal film boundaries you've become a little bored with. Well worth £9.99 from wherever you manage to jiffy bag it from.

Meanwhile in a slightly less alien environment my bird feeding followers are steadily growing. Whilst basting some beef sausages and toasting the buns this morning I (well Ali) counted 8 Pheasants, 1 Jay, 2 Wood Pigeons and numerous Tits and Blackbirds squabbling and sharing in mixed measures our bounty of scattered seed products, those that hang from feeders and those that ricochet across the path and into the grassy wilderness. A deep sense of well being follows and rapidly after that the taste of brown sauce and late breakfast munchies.

Right now a documentary is playing on Channel 4 exploring the historical world of St Paul. I'm not really paying attention other than to glean that it's the usual C4 slightly topical, slightly controversial mix of skewed opinion and wishful speculation. Amazing how the various parts of Paul's writings have become interpreted and misunderstood over time. As for me, in part I blame Paul and his rigid scribbles for many of the things wrong in my little world and the modern world, the attitudes, contradictions, intolerance and all...but then he did write that bit in First Corinthians 13. He couldn't quite have scripted District 9 however.

Now that the Winter Olympics is over and I did watch odd sporting bits, I remain disappointed that as of yet snowball fighting and snowman building are not official sports, how long must we wait?
Posted by impossible songs at 7:22 PM
Email ThisBlogThis!Share to TwitterShare to FacebookShare to Pinterest