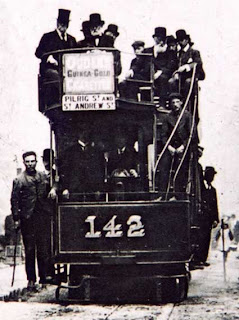 I was indeed in Scotland's capital city today but sadly failed to spot any of the elusive new trams they have there. On the Ten o'clock BBC news I did hear that one was seen carrying out speed trials in preparation for that far away day in 2014 when they run for real on metal rails from here to the far away middle of the town, oh yes! Apparently the mighty machine reached speeds of up to forty miles per hour with no red flagman in attendance. It is said that some local simple minded women who saw the machine speeding along fainted as if overcome by the vapours, cows couldn't give milk and hens stopped laying goose eggs. Angry farmers who watched it pass by shook their fists in the air and cursed God that such a thing should ever have come to cross their now barren and scorched fields. Christmas Cabbages and Brussels Sprouts were seen to shrivel and die and a donkey in Ratho suffered a massive heart attack at the Premier Inn. Meanwhile in nearby Gogar lightening struck the RBS HQ food court and the quiche dispensing machine jammed shut trapping some small children on a day out from Bathgate. In Sitehill all road traffic stopped thanks to the trams reputed sonic boom effect, it's believed that the windows in Arnold Clarke's were badly shaken as was the Hungry Drunk Burger van and a number of it's clientele. These trams have a lot to answer for but then again that's progress for you.
Posted by impossible songs at 11:22 PM
Email ThisBlogThis!Share to TwitterShare to FacebookShare to Pinterest